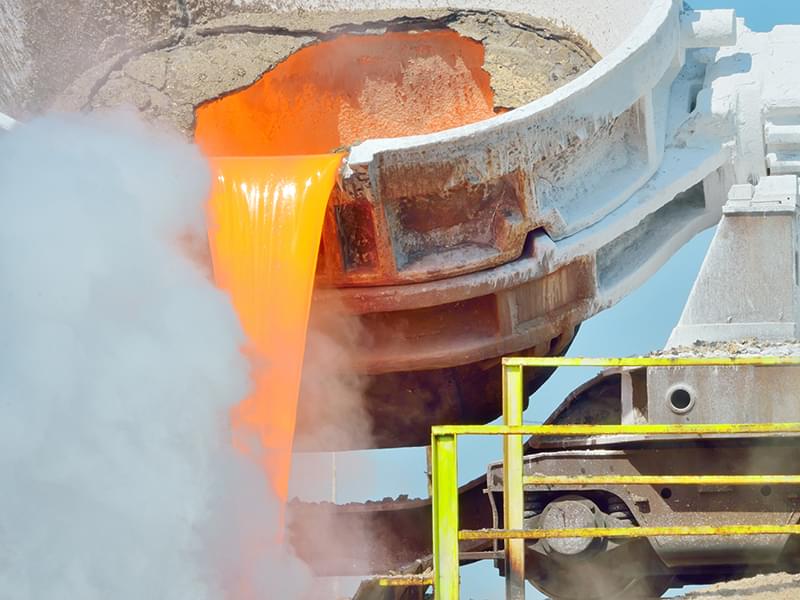 The market for ferrous slag will benefit from continued moderate growth in iron and steel manufacturing over the next decade. Coupled with expansion of existing uses and investigation of new uses, and strong activity in growing markets, the supply of this byproduct material will experience value and volume growth, according to The Future of Ferrous Slag: Market Forecasts to 2031, a just-released market report from Smithers.

Total global slag production volume is expected to grow by about 8% by 2026 and 10.5% by 2031, according to the new 10-year study. Percentage regional production growth will be strongest in Asia and the Middle East and will lag in Western Europe. Asia will continue to produce the predominance of global slag, much of which will replace decreasing production from historic iron and steel manufacturing areas such as Western Europe. 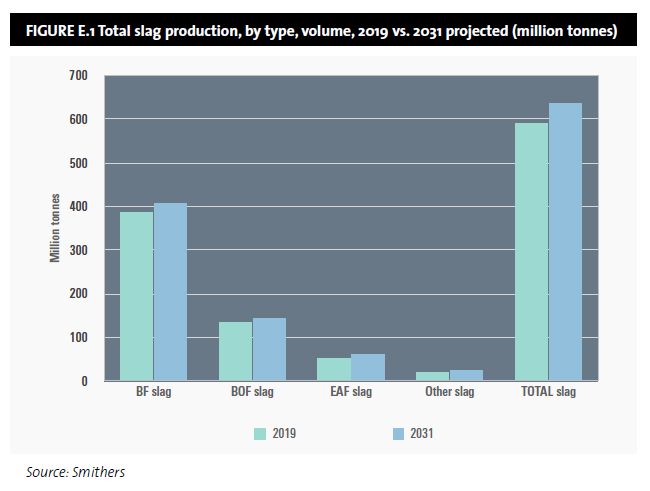 The overall value of global ferrous slag will increase at a faster pace than volume, driven by strong use of BFS as a substitute for traditional materials in cement and concrete construction. Increased use of steel slag (SMS) in road and civil construction is also taking place, driven by positive regulatory and sustainability program changes.

Potential reductions in supplies of natural aggregates in some areas and a likely mellowing of global steel production in the latter half of the coming decade will also help drive slag prices upward, the expert study said. As a result, total global value of ferrous slag is expected to increase from $24 billion in 2020 to $32.5 billion in 2026 and $40 billion by 2031, a total CAGR of 4.8%.

The influence of iron and steel production

The study developed by Smithers outlines how iron and steel production is expected to increase modestly at pre-pandemic levels through the middle of the 2020 decade, spurred by additional planned blast furnace (BF) production that should come on-line by 2025 which will increase the quantity of blast furnace slag (BFS) and basic oxygen furnace (BOF) slag produced. At that time, the pace of total iron and steel production is expected to somewhat trim back. Steel production will also continue to migrate from BOF to electric arc furnace (EAF) methods, particularly in Asia, North America, and the Middle East where it already has a significant imprint. The move will be slow but steady, spurred by changes in process inputs, increasing use of recycled steel, and improvements in the overall quality of EAF produced steel.

The market will be impacted by the gradual movement in steel production from traditional BF-BOF methods to EAF methods. Unlike conventional BF-BOF facilities, which need convenient access to multiple raw material sources, EAFs can be located virtually any place cheap electricity is available and scrap steel, direct-reduced iron (DRI) or merchant pig iron can be used as feedstock. After being a larger percentage component of total global production during the mid-2010s and then declining when substantial BF-BOF production was added in Asia, EAF production as a total of overall global production is beginning to again increase.

The move toward EAF steel ultimately will impact ferrous slag production because EAF processes rely heavily on scrap and recycled steel during the steel production process. While they use some iron, the EAF processes don’t produce the quantity and type of slag that the traditional BF-BOF process does. As a result, the EAF migration will likely tilt the overall BFS/SMS ratio and place some pressure on BFS supply and pricing.

Slag production will continue to be driven by Asian iron and steel manufacturing, which has grown significantly over the last two decades. Given that ferrous slag is fully a by-product of iron and steel manufacturing, and the preponderance of global iron and steel production is in Asia, it stands to reason that most of the world’s slag is produced in Asia. It is likely that the Asian production percentage will increase somewhat over the period of this report. Large quantities of ferrous slag are gobbled within China, likely by construction industry use in cement mixes, but some Asian countries, such as Japan, export large quantities of ground granulated blast furnace slag (GGBS).

Slag production in other regions has been significantly impacted by the surge in Asian iron and steel manufacturing. North American steel output has increasingly moved toward EAF methods over the past two decades; Western Europe production has stagnated and likely will decline over the next decade. While production in other countries, such as South Africa, has languished in large part due to the influx of Asian steel. Ferrous slag output has been impacted in a similar manner.

Regulatory changes will support increased demand for ferrous slag as countries and regions institute programs to reduce waste disposal, increase use of by-product materials, and improve energy efficiency in new and existing structures. The European Green Deal and United Nations Climate Action Plan, both of which will be reviewed by individual regions and countries, are prime examples.

Sustainability schemes, particularly pull-through programs such as the Leadership in Energy and Environmental Design (LEED) program and Green Globes, will also continue to drive demand for ferrous slags because they promote and endorse the use of by-product materials in all forms of construction. Such programs establish consensus rating criteria for the evaluation of structures, primarily buildings, and award certifications based on the level of compliance that can be used by building owners for marketing purposes. Essentially, the “greener the building” the better. 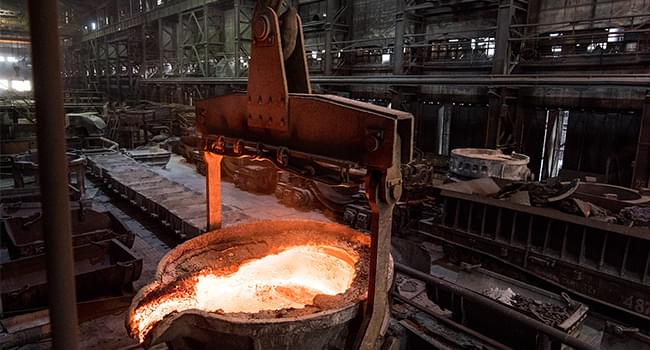 The Future of Ferrous Slag: Market Forecasts to 2031