During any given winter season, testing on various types and conditions of snow will sometimes show a tire that performs well in one condition and poorly in another. Thus, it is important to characterize snow conditions as they relate to tires.

Snow compaction, crystalline structure, shear strength, and moisture content are interrelated.  A thorough evaluation of a tire’s traction effectiveness can only be ascertained after studies have been made on several different snow surfaces.

Crystalline structure and moisture content affect both compaction and shear strength in packed snow.  These parameters cannot be readily isolated, but a rating can be placed on the results of both variables by making a combined vertical and horizontal compression test.

After considerable research on past methods of measuring snow compaction, it was found that these methods were too far removed from the action of a tire tread in snow to be meaningful.  Engineers at what was then known as Smithers/CTI designed and constructed a “penetrometer”, or “snow compaction gauge” to measure the combined effects of the vertical compaction factor and the horizontal compressibility.

What is a CTI Gauge?

The CTI Penetrometer consists of a projectile attached to a measuring rod and assembled inside an aluminum tube with a flat base.  All gauges are assembled by Smithers’ personnel.

In use, the base of the tube is set on the snow surface; the projectile is pulled to the top of the tube and 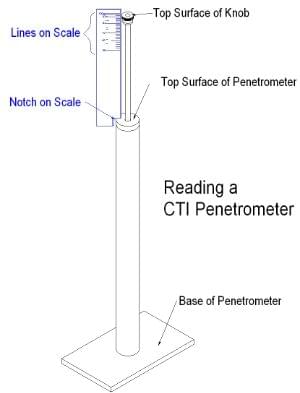 released. It drops from its fully raised position, through the guide tube, and onto the test surface.  Its kinetic energy is expended in both vertical penetration and sideways compression.  The penetration distance is converted by a hand-held scale to a CTI Compaction Number, ranging from 50 to 100.  The meanings of these numbers are shown in Table I.

CTI Compaction Numbers have been described in various ASTM and SAE standards, including ASTM F1805 and its predecessor SAE J1466.  Ideally, CTI Compaction Numbers should be uniform over a given test surface (± 4).  Typically, winter driving traction testing is conducted on a surface with readings in the range from 70 to 80, called Medium Pack Snow. UNECE R117 C3 testing would require a CTI from 80 to 90.

The CTI Penetrometer and its use are described in Appendix D of SAE Recommended Practice J1466, “Passenger Car and Light Truck Tire Dynamic Driving Traction in Snow” and in Appendix X1 of ASTM F1805, “Standard Test Method for Single Wheel Driving Traction in a Straight Line on Snow- and Ice-Covered Surfaces.”  ASTM F1805 is used to determine whether a tire is eligible to receive the RMA’s “mountain snowflake symbol” indicating suitability for use in severe snow conditions.

To get a quotation and to purchase a CTI Penetrometer, please contact Sean Connolly at the link below.
Cancel
CTI Gauge

In this one-hour webinar, Smithers expert Eric Pierce discusses an overview of several global test methods, how they compare, and how they’ve changed in recent years. The presentation will cover: